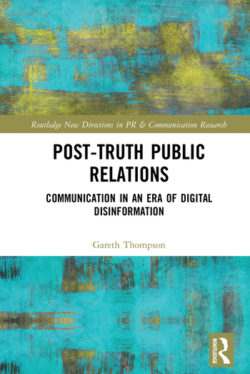 This new book published by Routledge proposes that while we can now look back upon the last 80–100 years as a period of classical PR, that style is being supplemented by the emergence of a post-classical form of PR that has emerged in response to the post-truth era.

Gareth Thompson of London College of Communication explores the purpose, practice and effects of public relations (PR) at a time that has been variously described as an era of populism, post-truth and fake news. It considers how PR processes have contributed to the current social condition of post-truth and what constitutes PR work in this environment.

This new style of PR consists of a mixed repertoire of communicative work that matches the new geometry of digital media and delivers a mix of online engagement and persuasion in order to meet the needs of increasingly partisan audiences. Using contemporary case studies and original interviews with PR practitioners in several countries, including China and the Philippines, the book investigates how PR workers have reconciled their role as communicative intermediaries with the post-truth era of digital disinformation.

EUPRERA interviews Øyvind Ihlen, Jim Macnamara and Ralph Tench asking them a short insight on ethics. These interviews are part of the First Ever Global Ethics Month, launched by the Global Alliance for PR and Communication Management.

The campaign #EthicsMatter will bring attention to the importance of ethics in communication in all areas of business, government, non-profit and education and showcase all that our members are doing to educate and empower public relations professionals.

Watch the 3-min insight on #PostTruth society, #legitimacy and #professionalism

Watch the 3-min insight on #PublicTrust, #professionalism and #manipulation

More info on the
First Ever Global Ethics Month 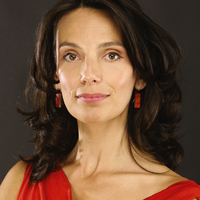 by Alexandra Crăciun, Associate Prof. Dr., University of Bucharest
A research analysing the penalty records of the National Football League and The National Hockey League in United States during a time frame of fifteen years, carried at Cornell University, was proving that the teams wearing black uniforms were penalized more often than the teams wearing other colors. The result was confirmed by another experiment, displaying two identical videos with the same sequence of a football game, one version with players wearing black, and one version with players wearing white. The videos were showed both to professional football referees, and to college football fans, asking them to assess the game. No matter if the viewers were professionals or fans, they decided to penalize the team wearing black more often than the team wearing white.
Can we really “frame” the reality by using colors, sounds, textures? Can we use uniforms, logos, and videos to “program” a certain response of specific targets?  Can strategic communication, branding, or public relations really change the public opinion about a specific subject? Can we provide different “versions” of truth switching from black to white, from penalty to reward? Can we generate alternative patterns of behavior, altering just the colors of the T-shirts? The answer, coming from emerging fields of research such as behavioral economics and neurosciences, seems to be: YES. But there is one more question. Where is the truth?  Or better said – who is right, in the end: the ones judging the team wearing black uniforms; or the ones that were judging the team dressed in white?
The Oxford Dictionary’s word of the year in 2017 seems to bring another perspective. The adjective ‘post-truth’ is opening a new realm where questions like this are becoming irrelevant. Do we really need to see who is right?
With 2000% increase in usage compared with 2015 (after Brexit and the US elections) the term seems to be coined by Steve Tesich, in an essay published in The Nation magazine in 1992. The ‘post-truth’ adjective is defined as ‘relating to or denoting circumstances in which objective facts are less influential in shaping public opinion than appeals to emotion and personal belief’.
As the philosopher Timothy Williamson was putting forth in a recent conference held in Bucharest, ‘post-truth’ is neither a synonym with truth, nor an equivalent of lies, and falsehood, since it is simply making the distinction between truth and untruth irrelevant. According to the The Oxford Dictionary: ‘In this era of post-truth politics, it’s easy to cherry-pick data and come to whatever conclusion you desire’. In other words,  ‘reality’ just a matter of  ‘interpretation’ within an age of disruption.
Basically, the idea is not new, but deeply related to the concept of  ‘deconstruction’ – one of the “basic” post-modern ideas launched in 1967 by Jacques Derrida (Of Grammatology).
Reality, truth, are no longer based on scientific evidence, there is no need of facts, or better said – facts might be altered, distorted and transfigured. The new frames of communication where the Web provides a parallel ‘media eco-system’, where the network of users are generating ‘echo chambers’ where everybody’s voice is legitimate – makes experts and expertise useless. Clickbaits based on ‘curiosity gaps’ are fueling alternative media narratives where scientific information is replaced by emotionalism.
‘My science is named Evan, and he’s at home. (…) The University of Google is where I got my degree from.’ These phrases used in 2007 and quoted by Matthew d’Ancona in his book The New War on Truth and How to Fight Back (Ebury Press, 2017) were used by the model Jenny McCarthy on Oprah Winfrey’s show, referring to her boy called Evan, and arguing against vaccination.  The perspective is paradigmatic for the age of ‘post-truth’. ‘Mommy instinct’ or ‘Google University’ are becoming personal and emotional alternatives challenging the history of scientific research on vaccination. ‘Web had digitally turbo-charged false science’, argues the same author, but it is also clear, that an empowered consumer has “turbo-charged” the references of our world.
In the article entitled ‘Valuable Virality’, published by the Journal of Marketing Research (2017), Ezgi Akpinar and Jonah Berger are explaining that ‘compared with informative appeals, emotional appeals are more likely to be shared.’
The results were just confirming a trend identified by the ECM since 2013 as the most important challenge of international communication (Zerfass et. al, 2013, quoted in Communication Excellence: How to Develop, Manage and Lead Exceptional Communications by Tench, Verčič, Zerfass, Moreno, Verhoven, 2017). In 2013 already, 73,7% of the communication professionals believed that ‘developing communication strategies with social, cultural and political sensitivity’ was the most important challenge in their field.
From ‘social, cultural and political sensitivity’ to emotionalism was just one step. Strategic communication and public relations are dealing with challenges related to the new fragmentation of the media sources, with facts that are just altered to fit. The ‘emotional-pack’ becomes more and more the new standard for getting viral and generating buzz. Binary oppositions between facts and opinions, good and bad, real and fake, truth and lie – seem to lose relevance in front of the emotional appeal that turns into ‘likes’ and ‘shares’. The role of the Communication Manager (see Communication Manager Roles Grid in ‘How to play the game’, Volk et. al, Communication Insights, Issue 3, 2017) seems to turn from a “multiplicator” of knowledge, more and more into “multiplicator” of ‘strategic’ emotions.
Relativism, emotionalism, alternative media narratives are mapping the current world of communication in the age of ‘post-truth’ bringing new challenges for the public relations profession, in a world of augmented possibilities.
Beside these, the question is still open. Who was right in the end: the ones judging the team wearing black uniforms or the ones that were judging the team dressed in white? Where is the truth?
Basically, it depends.
In the age of ‘post-truth’ this is anyhow not relevant, because a communicator with some visual communication skills might be able to use Photoshop or an app to adjust colors of the uniform, right on the screen.