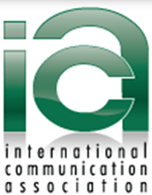 The Public Relations Division of ICA invites submissions for the 2020 James E. Grunig and Larissa A. Grunig Outstanding Thesis and Dissertation Awards.

Eligible entrants for this competition cycle include master’s theses and doctoral dissertations successfully defended during the period from January 1, 2018, through December 31, 2019. Theses and dissertations must focus upon phenomena, issues and questions relevant to the study of public relations. Submitters don’t have to submit the whole dissertation or thesis but will have to deliver a 30-40 page manuscript in English by February 1, 2020.

Award winners will be recognized at the ICA Conference
in Gold Coast, Australia, May 21-25, 2020.

The European Public Relations Education and Research Association (EUPRERA) has awarded two master students for their excellent theses in strategic communication at the EUPRERA annual congress in Zagreb on September 28. The congress is known as the major gathering of scholars and professionals interested in advancing the profession of public relations and corporate communications on the continent, hosted this year by University of Zagreb in Croatia.

The PhD Award for Excellent Doctoral Thesis is a bi-annual prize awarded by EUPRERA together with the PRCA (Public Relations and Communications Association) and ICCO (International Communications Consultancy Organisation), aimed to stimulate the academic discussion and build the body of knowledge in communication management across Europe. The jury, headed by Prof. em. Dr. Betteke van Ruler and Prof. em. Dr. Günter Bentele, selected the winning thesis and the award has been delivered by Ralph Tench (EUPRERA president), Sue Wolstenholme (PRCA representative) and Günter Bentele (head of the jury): 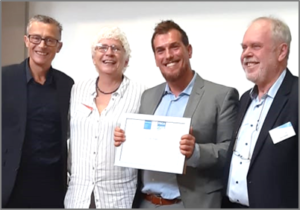 “Strategic Communication: The Instigatory Theory of NGO Communication (ITNC)”, by Evandro Oliveira. Supervisors: Teresa Ruão, University of Minho, Portugal; Ansgar Zerfass, Universität Leipzig, Germany.
After NGOs have been made understandable as civil society organizations from various disciplinary perspectives, the author develops a new model for NGO communication, the Instigatory Theory of NGO Communication (ITNC). Different models are being tested in the theses; a mixed-method-design, composed of a worldwide study on international human rights NGOs as well as an elite interview study are carried out. As one result, the ontological principles of the ITNC model were confirmed and the model turned out to be applicable for NGOs. The theoretical as well as the empirical part of the theses are of a very high standard. The dissertation was defended simultaneously at the University of Minho and at the University of Leipzig.
The Jury decided unanimously that Evandro Oliveira’s theses was the best in the whole field of applications, fulfilling all the criteria in an excellent manner. Complexity and appropriateness of the underlying theory, sophisticated empirical studies, practical orientation and suitability for practice are characteristics that distinguish this thesis. The development of an independent and new theory, the mentioned Instigatory Theory of NGO Communication, the broadness and complexity of the theory as well as the empirically very elaborate foundation are.

Master Thesis Award for Excellence is an annual prize aimed to celebrate the PR academia and the role performed by European Higher Education Institutions in the evolution of knowledge of this field. The jury, headed by Alexander Buhmann, from BI Norwegian Business School in Norway, selected the winning theses in two categories. The awards have been delivered by Stefania Romenti (EUPRERA director) and Ralph Tench (EUPRERA president): 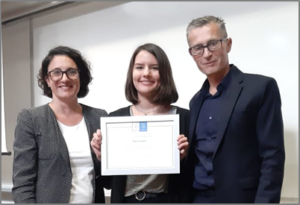 “Building the Nation: Analysing the Scottish Government’s Public Diplomacy Campaign Scotland is Now in the Context of Brexit”, by Melissa Walker. Tutor: Mariola Tarrega, University of Stirling, UK.
Brexit is currently one of the most salient and prevalent political challenges in the EU. The complex and uncertain process towards a British independence from the EU has led to a controversial debate over Scottish independence. Melissa Walker’s thesis is situated in this important context and focuses on elements of nation building in the digital campaign “Scotland is Now”. Using the case of the campaign, Walker looks at how elements of nation building are employed to cultivate an image of Scotland, and how these nation-building elements can be related to Scotland’s soft power strategies in the context of Brexit.
Overall, the jury congratulates Melissa Walker to a very interesting and topical thesis that focuses on important dimensions of a communication campaign in the complex negotiation processes over nation identity, thereby bridging conceptual insights from public relations, public diplomacy, and work on nation building. 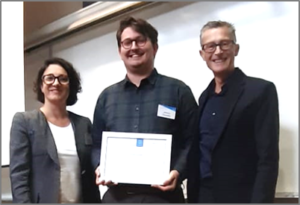 “The Impact of International News and Stereotypes on Country Images. A Case Study of the Swiss Country Image” by Jérôme Chariatte. Tutor: Diana Ingenhoff, University of Fribourg, Switzerland.
The study of country images has become a vital research domain within in public diplomacy and international strategic communication. In his thesis, Jérôme Chariatte uses agenda setting theory and news value theory to hypothesize how international news and news factors, such as proximity, come to determine people’s country image. Further, the candidate incorporates a cognitive level in his analysis by including recent discussions on national stereotypes, as well as a newly developed five dimensional model of the country image.
For public diplomacy and strategic communication practice, the insights from Chariatte’s thesis offer a complex picture of the conjoined and weighted influence of national stereotypes and the international media on the country image, and assess how they differ along the lines of geographic proximity. The results allow practitioners to better understand the complex process of the formation of country images and can serve as an evidence based source for strategic communication measures accordingly. Overall, the jury applauds Jérôme Chariatte for outstanding academic work that contributes to a topical discussion in the field and offers insights based on a sophisticated research design. 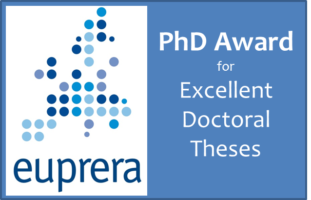 All doctoral dissertations in any language are eligible for submission, provided they have been formally approved with a formal examination at the candidate’s university within the last 24 months before the submission deadline.

Applications for the next edition of the EUPRERA Master Thesis Award for Excellence are open until February 27.
Don’t miss the opportunity to have your work recognized and join the PR community in Aarhus, Denmark: the winner(s) will be invited to present the thesis and receive the prize on the occasion of the EUPRERA annual congress, all expenses covered!
More info here