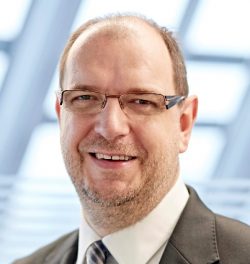 Aarhus, September 29, 2018 – EUPRERA has named Prof. Dr. Ansgar Zerfass, from Leipzig University in Germany, a “Distinguished Public Relations Scholar”. The lifetime award recognizes his outstanding contribution to research and education in public relations as a social science discipline on an international level. He was awarded today at the Aarhus University, on the occasion of the EUPRERA annual congress, by the association’s president Professor Dr. Ralph Tench. 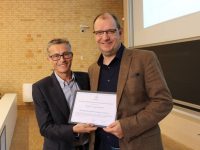 There’s a long tourist tradition in most of our countries of selling ‘sticks of rock’ (candy) from a holiday destination. Particularly a tradition in seaside resorts. Candy like this often has the name of the town or location written inside. And some people by their loyalty to a place, issue or idea are sometimes compared to a stick of rock. Cut them through and they will say Real Madrid, Aarhus, Save the Planet.
For this year’s Distinguished Scholar I believe this is true. If we cut them in two inside it would read EUPRERA. They have been a loyal, hard-working and dedicated member of the Board of Directors, President and Past President as well as a driving force behind some of the most high-profile initiatives for members and the Association worldwide. In fact, if we cut them through it would say two words: EUPRERA and ECM (the European Communication Monitor).
Yes, no prizes for guessing the member we would like to acknowledge today is our good friend and colleague, Professor Ansgar Zerfass from the University of Leipzig Germany.

As we know from past congress many of his students have won prizes for master and bachelor thesis. On top of all of this Ansgar is known as a prolific journal editor, book author and frequent journal author. At conferences he is an ever present in sessions and presenting and chairing panels. Sometimes in the two or three rooms at the same time!
But for many Ansgar is best known for his commitment and dedication to the ECM. A project that has benefited EUPRERA and its members for over 12 years. Those of us in the ECM team fully acknowledge Ansgar’s energy and focus for this project which has grown to include now a Global Monitor covering Europe, Latin America, Asia Pacific and now North America.
More info
Virginia Villa
dpra@euprera.org