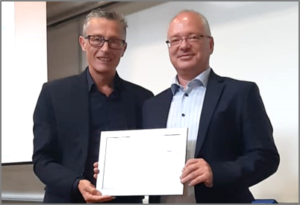 EUPRERA has named Prof. Dr. Dejan Verčič, from University of Ljubljana in Slovenia, a “Distinguished Public Relations Scholar”. The lifetime award recognizes his outstanding contribution to research and education in public relations as a social science discipline on an international level. He was awarded on September 28, 2019, at the University of Zagreb, on the occasion of the EUPRERA annual congress, by the association’s president Professor Dr. Ralph Tench.

What Dejan brings to his academic roles is a sharp critique of the discipline from a deep understanding of the research and literature base. And he combines this with the insightful application of the theory to practice. This gives his discussions and observations added value as he provides not only disciplinary understanding but an appreciation of the implications of communication on both society and organisations.

Dr Dejan Verčič is Professor, Head of Department of Communication and Head of Centre for Marketing and Public Relations at the University of Ljubljana, Slovenia and Partner and Knowledge Director in strategic communication group Stratkom, in Slovenia.

Dejan is as many will know a regular speaker at universities, academic and professional meetings around the world. And as well as all of this Dejan has been a member of the ECM (European Communication Monitor) team since 2007.