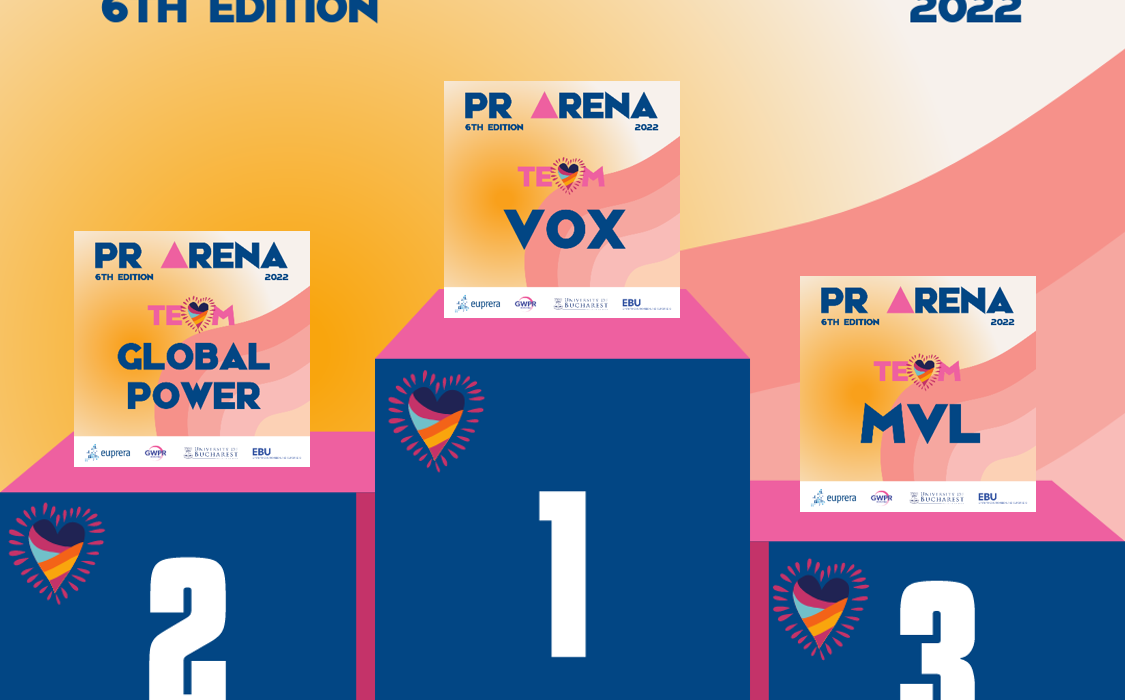 The 6th edition of the PR Arena student competition, held under the umbrella of EUPRERA, announced its winners

Organised by Global Women in PR Romania and the Faculty of Journalism and Communication Sciences, University of Bucharest. The 6th edition of the competition had the European Broadcasting Union as its international partner. First prize for the competition is a trip to the Jury Final of the 2023 Eurovision Song Contest to be held in Liverpool, UK.

November 24, 2022 – PR Arena, the brief-based competition for communication students, announced the winners of its sixth edition, held this fall for the first time under the umbrella of EUPRERA (European Public Relations Education and Research Association) and in partnership with the European Broadcasting Union (EBU), the world’s  foremost alliance of public service media. The competition was started in 2019 by the professional association Global Women in PR Romania (GWPR) in partnership with the Faculty of Journalism and Communication Sciences (FJSC) within the University of Bucharest, Romania. The current edition brought together 33 students from 11 universities in 10 countries (Austria, Bulgaria, Denmark, Georgia, Portugal, Romania, Spain, Turkey, UAE and the UK). 24 students reached the Final and competed as 8 international teams, which were evaluated by an international jury, made up of communication experts and academics representing the EBU, EUPRERA, GWPR and the University of Bucharest. 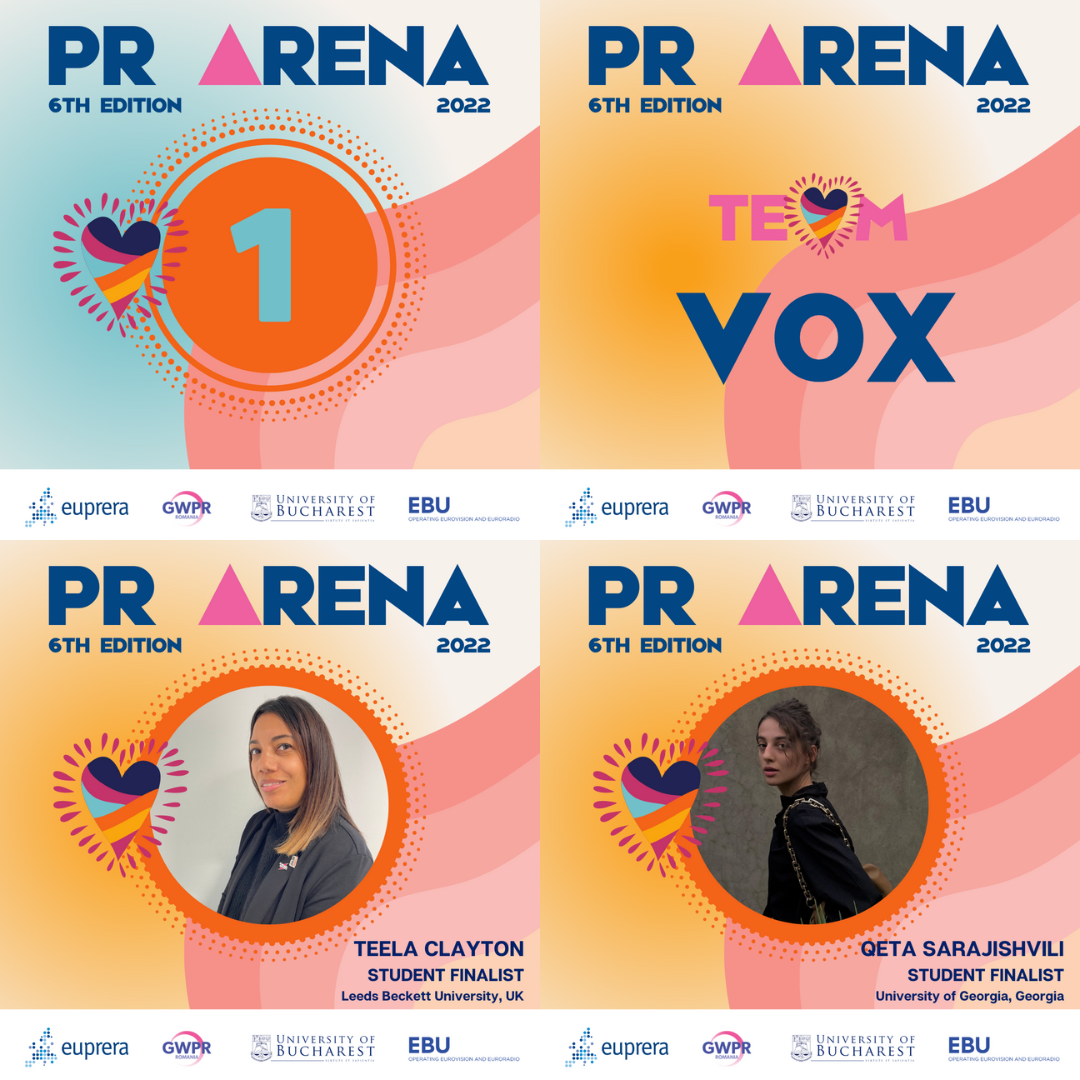 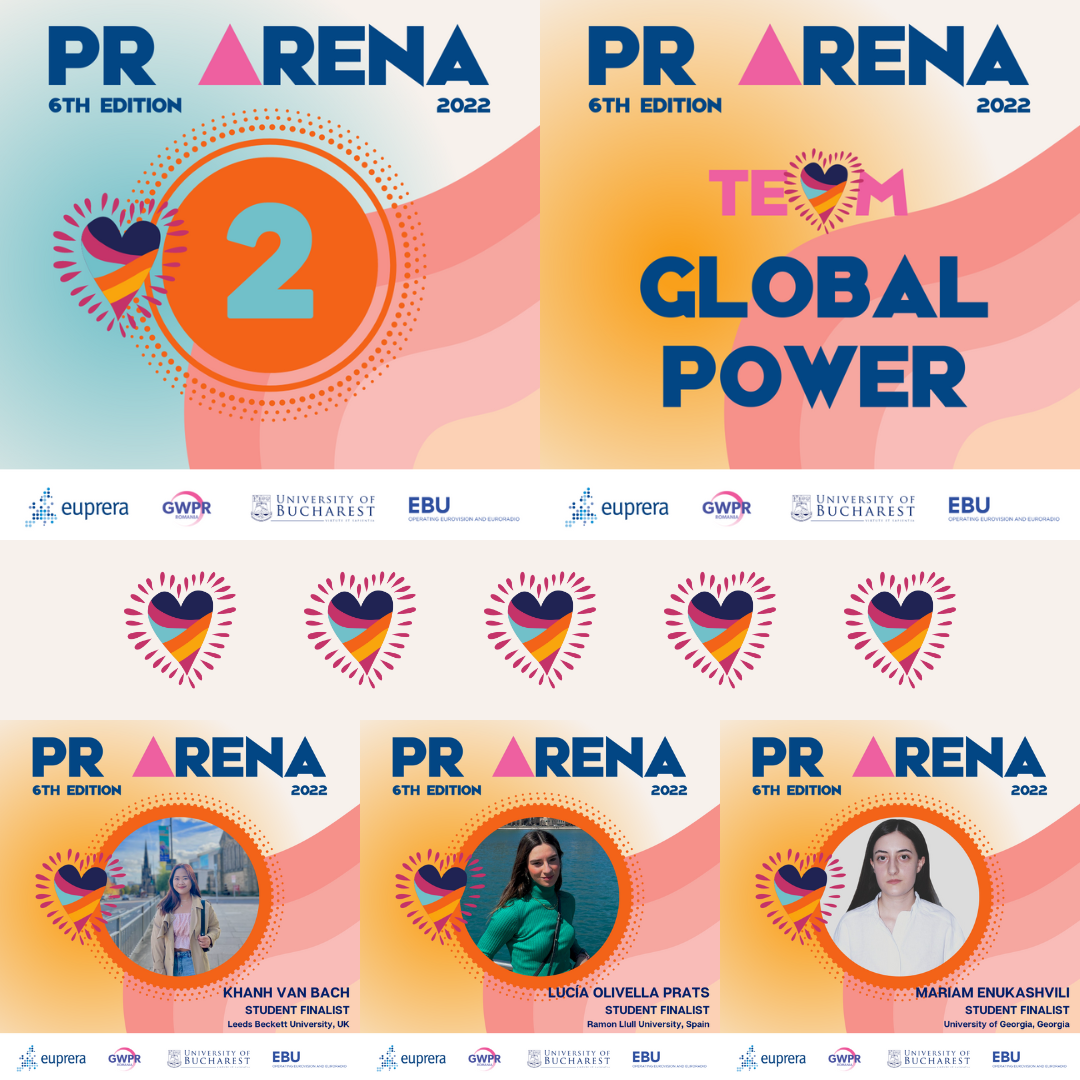 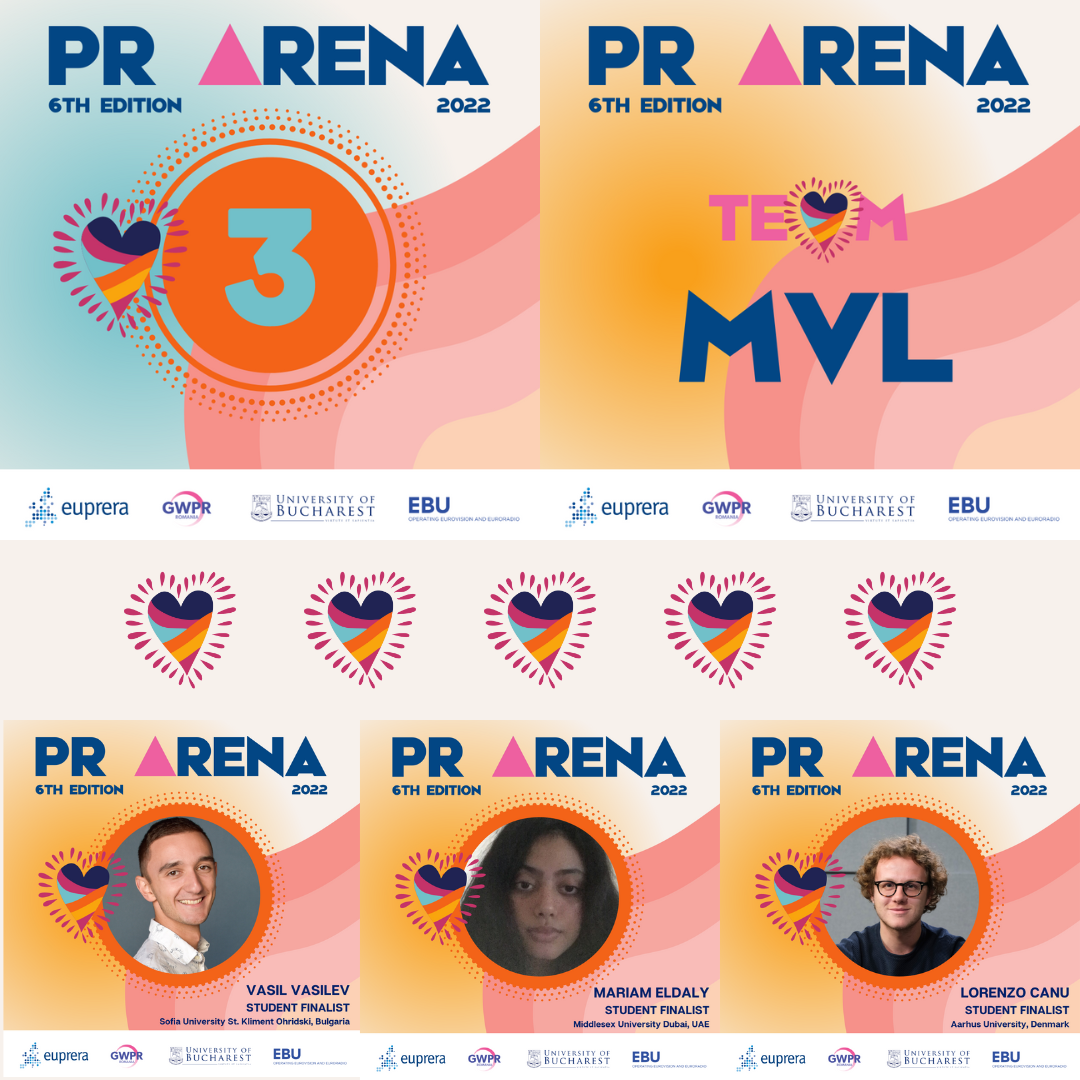 The 6th edition of PR Arena took place over two weeks, from November 8-23, 2022. The first days were dedicated to classes. The organisers prepared two Masterclasses on International PR Campaigns (given by Dr. Raluca Moise, professor at the London College of Communication, University of the Arts London, UK) and International Issues Management (given by Dr. Audra Diers-Lawson, professor at Kristiania University College, Norway). The aim of the courses was to provide essential information to help tackle a PR brief in a professional manner. The 33 students that attended the courses were nominated by institutional and individual members of EUPRERA representing the following universities:

The 24 students that reached the final step of the competition worked in mixed international teams of 3, with the support of professionals from the communication industry, acting as mentors. Their goal was to find the most creative and effective solutions to a brief provided by the EBU and aimed at promoting public service media worldwide through the Eurovision Song Contest.

The team that won the 1st place will go to Liverpool, in the UK, to the Jury Final of the 2023 edition of the Eurovision Song Contest, also benefiting from a financial support of 500 EUR/pers. granted by the EBU. The second and third place teams will receive online mentorship sessions from GWPR members (Pastel and Golin) and goodie-bags from the EBU. All participants will receive specialised Emerald books provided by EUPRERA.

The mentors of this PR Arena edition represented companies and agencies from Romania, Italy, Morocco and the Netherlands:

The jury of the 2022 edition was made up of representatives of all the organisations involved:

“Every time we organise PR Arena we see how it grows a little more. In 2019 when we launched we had students only from our partner FJSC, then we grew a little with other faculties from Bucharest, then from the country, then from the region, then we crossed the continent and now we organise the competition together with EUPRERA. The project was designed to help future generations of communicators work on a real brief under the guidance of an industry professional. Young people need a slice of reality before they leave the college benches, they need to get in touch with PR strategy put into practice. That’s what we want at every edition, to have at the end young people passionate about this profession, anchored in the reality of the job and with an experience that will help them find their first job in PR “, said Ana Maria Diceanu, president and co-founder GWPR Romania.

“For us, as teachers, education is much more than just theory. It means giving students the chance to experience in an applied way what they learn at school, in conditions as close as possible to the reality of the market. And through PR Arena we have built a project that has offered us for so many years the opportunity to bring industry and academia together, in an intense and memorable work week. We are extremely happy that our project has been picked up by EUPRERA and its Education Network, a network that can help it reach as many students as possible from all corners of the world”, said Dr. Anamaria Nicola, FJSC.

“Bringing PR Arena into the EUPRERA portfolio of projects represents an important step in the development of the educational component of the association. Starting a competition dedicated to students in communication and public relations has been a priority of the PR Education Network. However, we made the decision to not start from scratch, but to highlight the results already achieved by the members of the association by taking over a success story, PR Arena, and expanding it into the EUPRERA network. For the first edition in this new format where international collaboration and intercultural communication take center stage, we are delighted to have the support of the EBU and a brief that correlates the promotion of public service media with the promotion of Eurovision“, said Dr. Anca Anton, co-leader of the EUPRERA Education Network.

“We are delighted to have engaged with PR Arena, EUPRERA, and most importantly with all the students involved in this project / competition. Leveraging the talent and creativity of the students to forge a connection between the Eurovision Song Contest and Public Service Media, has been a fascinating process and has yielded some great insights for the EBU. We would like to thank everyone involved, especially the organisers, educators and the students for all their hard work in delivering this project so successfully. The well-deserving winning team, VOX, delivered a very original and creative project which met the challenges of our creative brief. We hope they have a great time at the Eurovision Song Contest Jury Final in Liverpool 12th May 2023!” said Michelle Roverelli, EBU Head of Communications, Marketing and Events.

About EUPRERA and the PR Education Network

Founded in 1959 under the name “CERP Education & Research”, in 2000 it changed to the name “EUPRERA” (European Association for Education and Research in Public Relations). EUPRERA is an autonomous organisation with almost 500 members from 40 countries, interested in promoting academic research and knowledge in public relations and strategic communication. Several transnational and comparative research and education projects are organised by affiliated universities. In order to spread new methodologies and research results, EUPRERA organises an annual scientific congress every autumn in collaboration with a university in Europe.

By initiating a network dedicated to education in communication and public relations, EUPRERA Education Network, the association aimed to support the development and dissemination of the best and innovative educational practices, at the same time facilitating their integration and research results in the teaching activity. Among the PR Education Network’s activities are the organisation of the PR Arena in a wider international context, the development of an online collection of educational materials in the field of communication and public relations, and the facilitation of contacts and educational exchanges between members of the network.

GWPR is a global organisation connecting PR professionals around the world. The community provides opportunities to share ideas, experiences and resources. GWPR offers networking opportunities, insights and leadership on flexible work schedule practices, reducing the gender pay gap with the goal of having a balance in company management teams and a better work climate.

Launched in June 2018 and having 80 members, GWPR Romania aims to strengthen the reputation of the industry, contribute to the education of the younger generation and provide interactions with the global network of professionals. Another objective is to support the rise of industry professionals to the management board of companies.

The Faculty of Journalism and Communication Sciences, University of Bucharest, Romania, offers a complex study programme in the field of communication sciences, with three fields of study: journalism, communication & public relations and advertising. Along with teachers specialised in this field, some of the best-known professionals in the field teach at FJSC.

Founded in 1990, FJSC aims to present students with the basics of mass communication, the techniques and moral requirements of journalism, understood as the current and rational reflection of events, through written, audiovisual or online media. FJSC offers the opportunity to deepen knowledge in the field of communication with applications in the sphere of public relations and advertising.

About the European Broadcasting Union

The European Broadcasting Union (EBU) is the world’s leading public service media (PSM) alliance. It has 112 member organisations in 56 countries and 31 associates in Asia, Africa, Australasia and North and South America. EBU members operate nearly 2,000 television, radio and online channels and services and provide a wealth of content on other platforms. Together, they reach an audience of over a billion people worldwide, broadcasting in 153 languages. The EBU organises the Eurovision Song Contest every year and is the broadcaster of Euroradio. More information at www.ebu.ch