Taking a Stand is the third study released by the Institute for Public Relations and Peppercomm: an analysis based on in-depth interviews with 25 senior communications and marketing executives in large companies about how their roles and responsibilities are shifting in light of the current social, cultural and political landscape.
Findings say that while companies are more comfortable with uncertainty, they also are spending more time on their organizational principles and values. This is not a political piece advocating for any position; rather, this is a paper focused on what the interviewees reported. Go to the full report

Amelia Reigstad, visiting assistant professor at the University of Wisconsin River Falls, recently released the findings of her PhD study that focused on gender differences in communication styles and their influence on workplace communications and the practice of public relations.
The study has been received incredibly well by industry professionals and local, regional and national media have taken notice. Details surrounding Reigstad’s study has been published in a variety of articles throughout North America including O’Dwyer’s Public Relations News, the #1 publication for PR and marketing communications pros. Reigstad attended the EUPRERA PhD seminar last fall and is completing her PhD at the University of Leicester. More info

The EUPRERA network on Public Affairs and Lobbying announces its first outcome with the article Framing “the Public Interest”: Comparing public lobbying campaigns in four European states, by Ihlen, Ø., Raknes, K., Somerville, I., Valentini, C., Stachel, C., Lock, I., Davidson, S., Seele, P., recently published on the Journal of Public Interest Communications.
It is frequently asserted that lobbyists appeal to the public interest to strengthen their proposals. This paper empirically corroborates this claim through four case studies cutting across different European cultural clusters and political systems. Go to the full paper 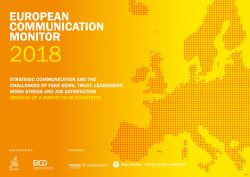 Mistrust in times of fake news and a volatile environment

Despite the persisting debate about fake news across Europe (agreed upon by 55.8 per cent of the respondents), this does not filter into the day to day experiences of communication practitioners (24.4 per cent). The most affected by fake news are government-owned, public sector and political organisations (44.6 per cent have been affected at least once in 2017/2018). Professionals based in Russia report the strongest impact of fake news on their organisations (53.2 per cent), followed by Serbia, Slovenia and Poland (all more than 40 per cent). 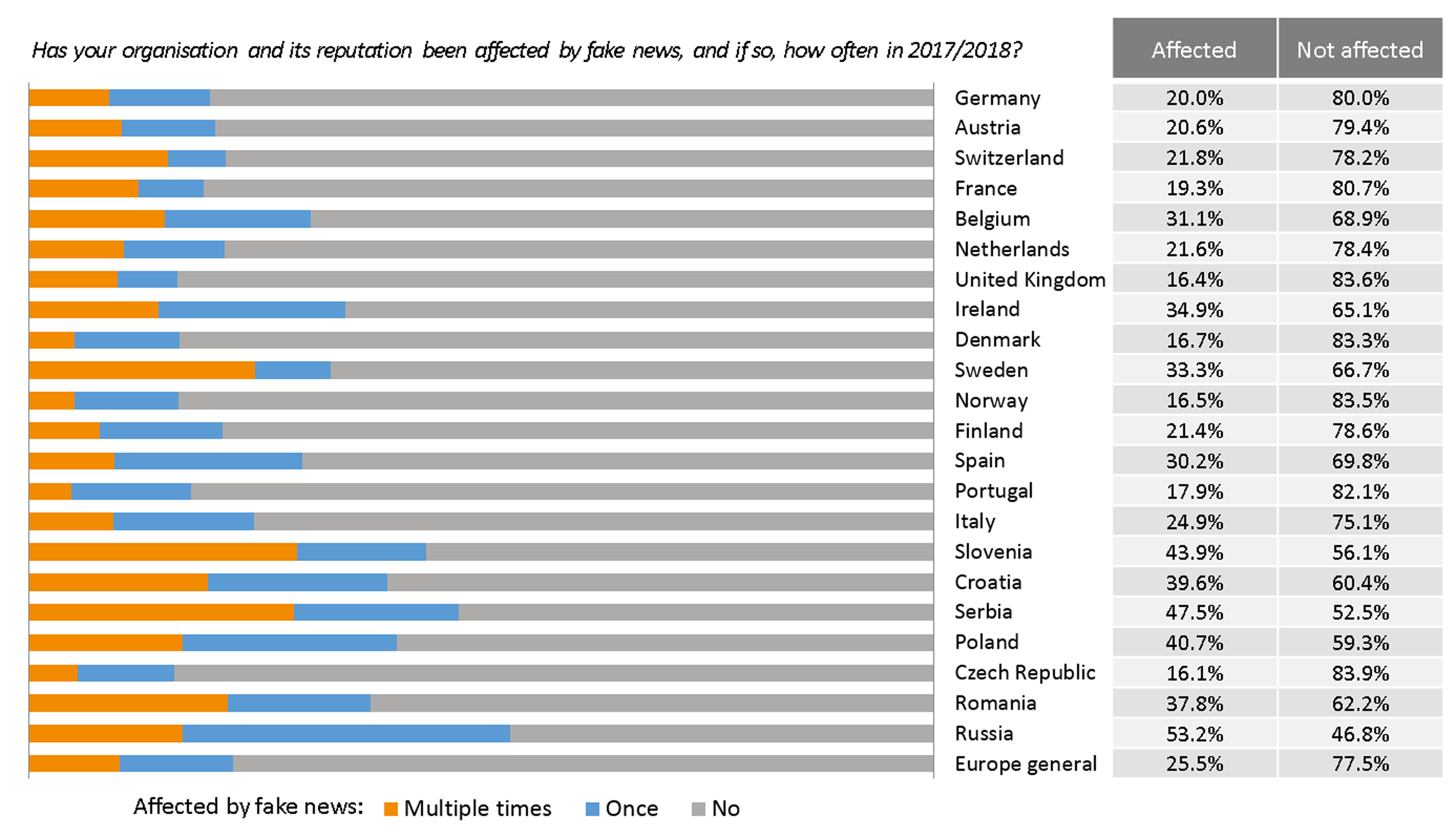 The sources of fake news follow the origins of the debate with social media being the main source of misleading content (81.3 per cent), but mass media (59.6 per cent) can also originate this form of information. Most communication departments and agencies are not sufficiently prepared to identify fake news: Only 12 per cent of affected organisations have established advanced routines.

In today’s digital and mediatised world organisations face a plethora of rapid-fire information that is ubiquitous. Hence, it needs algorithms for data processing and interpretations. Collecting and preparing such information as well as keeping decision-makers and (internal) clients up to date with useful information is a core task for communicators and helps them to fulfil their role. The results of this year’s monitor show that providing information to decision-makers is indeed a common practice across Europe. For 64.7 per cent this is a core task that helps to gain recognition for communications (68.0 per cent agree) and it offers great opportunities for positioning their unit (56.8 per cent).
By far the most important and most frequently provided information by communication specialists is about news in ‘gate kept’ media (mass media with professional journalists) and social media. Media monitoring reports and curated news briefings are provided regularly by respectively 74.6 and 59.6 per cent of the communication departments and agencies.
However, only monitoring reports about the published discourse in print outlets (newspapers, magazines) are provided on a daily basis in the majority of organisations (54.8 per cent). Daily insights on what is going on in social networks or on television are delivered less often (by just over 36 per cent). Only 28.4 per cent of the communication departments and agencies in Europe provide executive news briefings on a daily basis, i.e. advanced types of reporting with edited or curated content that delivers deep insights for decision-makers. 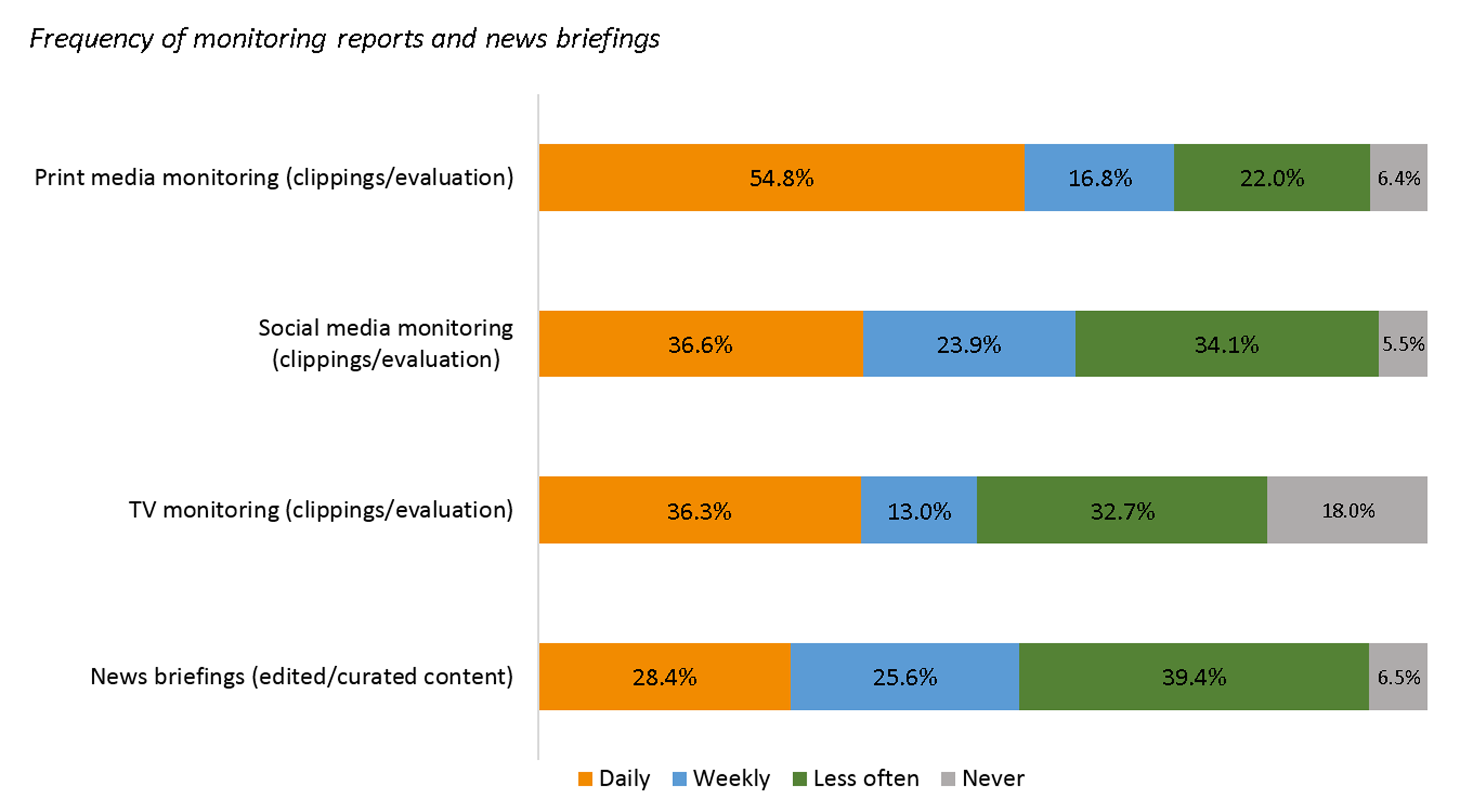 Job satisfaction and work stress in the communications profession

Longitudinal comparison with previous ECM surveys in 2010 and 2014 reveals a slow decline in overall job satisfaction. 28.9% of the surveyed practitioners would like to change their current employer within the next twelve months, and 5.2 per cent want to move out of the communications sector all together. However, three quarters of the communication professionals in Europe are satisfied with their job. Overall satisfaction is the strongest in consultants or agencies (79.0 per cent) and in countries like The Netherlands (86.2 per cent), Finland (81.5 per cent) and Germany (81.2 per cent). The strongest drivers for job satisfaction are interesting and manifold tasks, career opportunities and appreciation by superiors and (internal) clients. 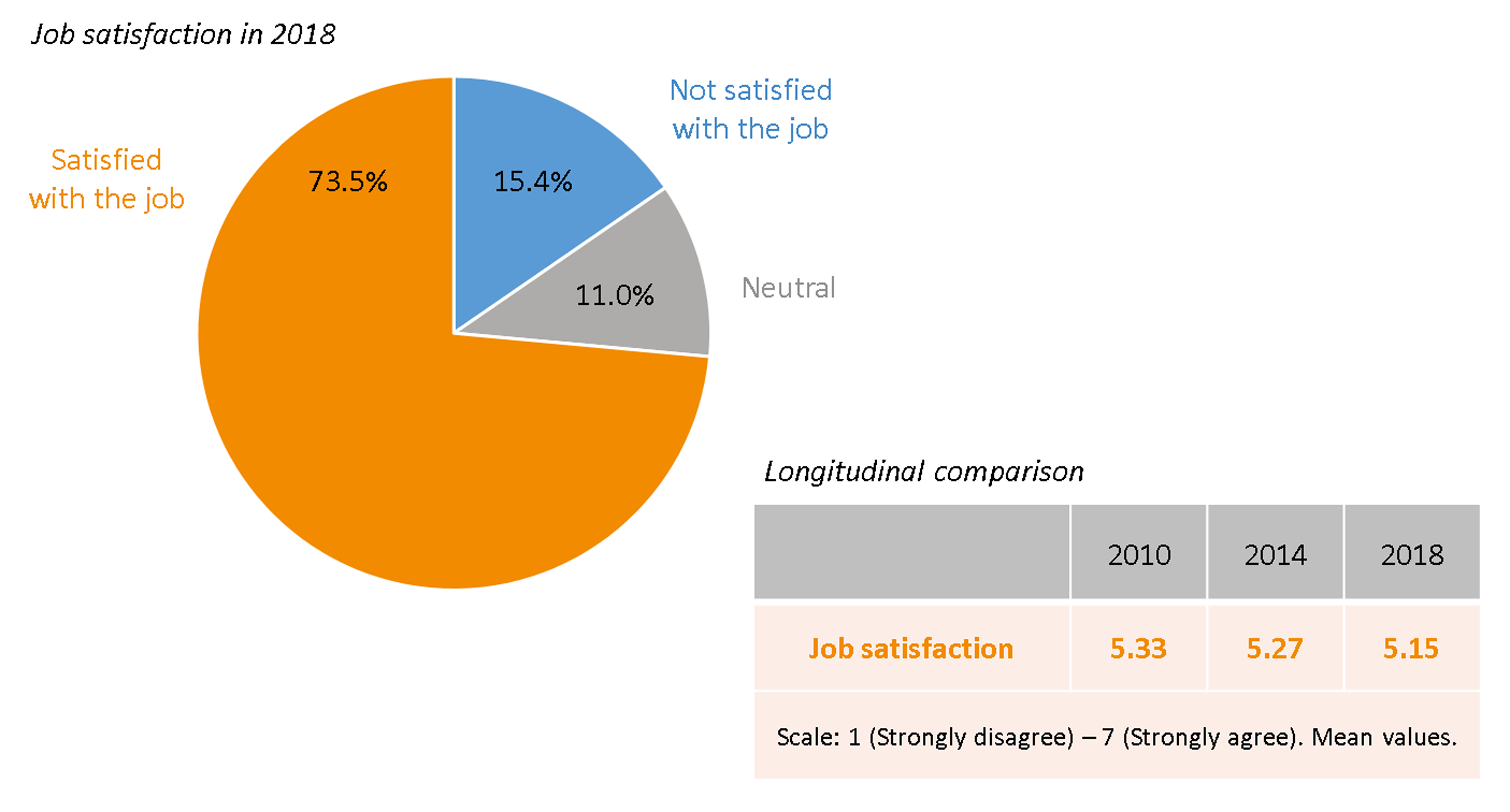 Communication professionals are often expected to be high performers in a hard-working culture. No wonder that four out of ten communication professionals (39.0 per cent) in Europe feel tense or stressed out during their working day. At the same time 25.0 per cent do not have the appropriate resources to manage this experience. A cluster analysis reveals that one in four (27.9 per cent) has serious stress problems (reporting stress and not being able to manage it). Following this theme, Portugal, France and Austria report the largest proportion of communication professionals with serious stress problems.
The most important drivers of work stress are the need to be constantly available outside working time to access emails and phone calls, too heavy a work load, the lack of opportunity for growth or advancement, information overload, as well as long working hours. The latter is most significant for professionals working in consultancies and agencies. 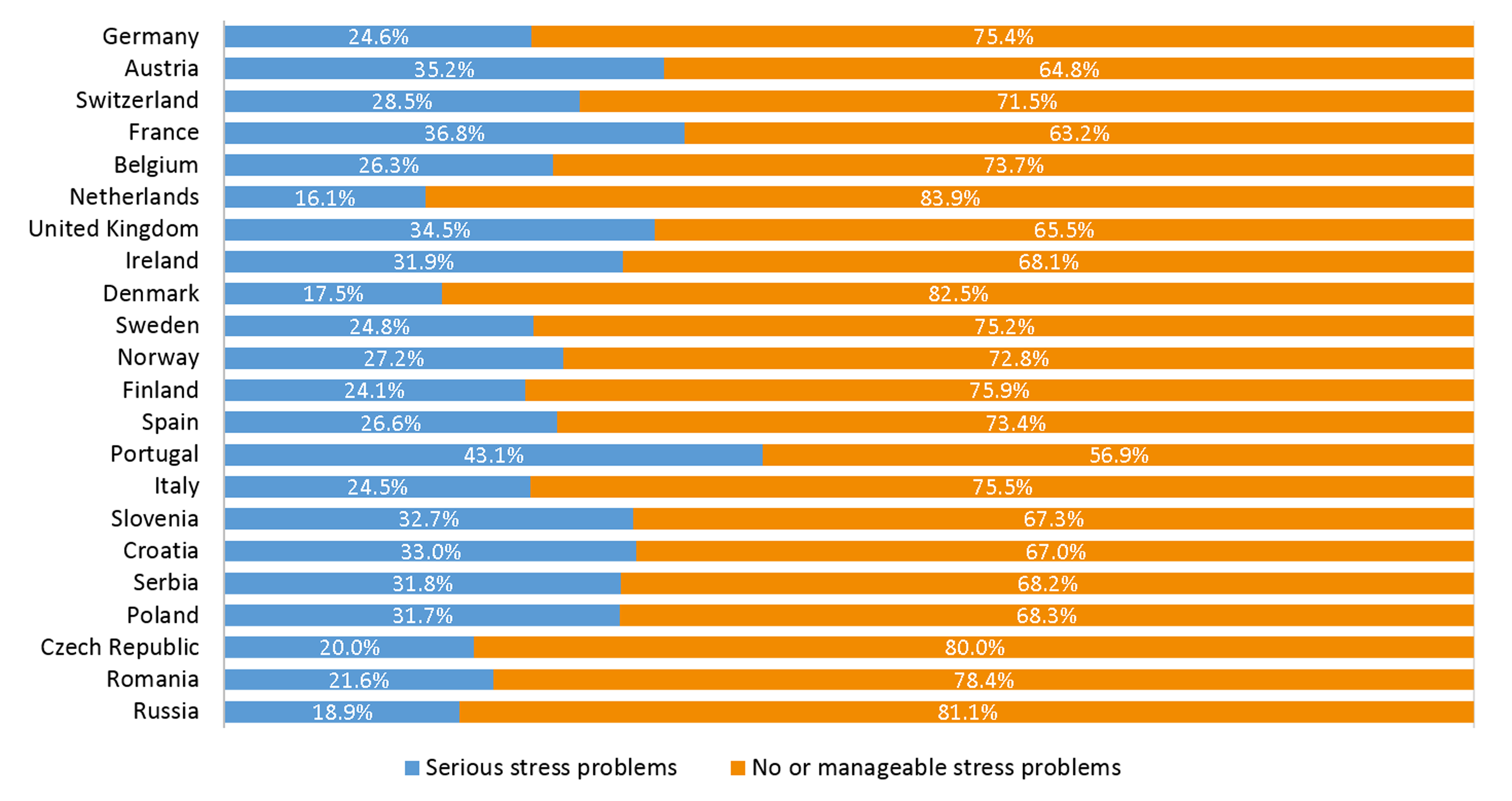 A supportive work environment enables practitioners to exploit their competencies and accomplish organisational goals. The study measured the status in communication departments and agencies across Europe by assessing organisational culture, trust in the organisation, leader performance, overall job satisfaction, and work engagement. Advanced statistical analysis shows that engagement is the key factor that links strongly to all other aspects. Engagement can be influenced by leaders, so in the end leadership makes the difference: educating, mentoring and promoting leadership skills should be a priority in the field.
Enhancing leadership performance, however, is a continuing challenge for the profession. The study reveals that every fifth communication leader (19.2 per cent) lacks leadership skills. A lack of performance at higher levels is clearly visible – especially when noting that subordinates rate the strategic involvement, ethical orientation and knowledge of the highest-ranking communicators clearly worse than the leaders themselves.

Statements from the EUPRERA lead researchers

Professor Ansgar Zerfass, lead researcher of the survey, explained: “During the last 12 months we have experienced significant events on the world geo-political stage with impact and implications for strategic communication. What stands out most of all from this year’s Monitor is the rising importance of building and maintaining trust by 39.5 per cent of all the respondents. The fact that fake news and propaganda have become more important and traditional mass media is losing ground makes public communication in general – and the communication sector specifically – more competitive than ever before. The public battlefield of meaning is fully erupted from the offline to the online world and back and forth.”

These are some of the key results found in the 12th annual European Communication Monitor (ECM), a survey based on interviews with 3,096 communicators in 48 European counties. The monitor  was launched today in Berlin. A full report is available online at www.communicationmonitor.eu.
Notes for the editor:
The ECM is annually organised by the European Public Relations Education and Research Association (EUPRERA) and the European Association of Communication Directors (EACD), supported by premium partner PRIME Research, a member of the Cision Group, digital communications partner Fink & Fuchs, and media partner Communication Director magazine. The communication monitor series is known as the most comprehensive research in the field worldwide covering more than 85 countries – the European survey is complemented by bi-annual surveys in other regions like Asia-Pacific, Latin and North America.
A free PDF report with full results as well as a video featuring highlights from the study is available at www.communicationmonitor.eu.