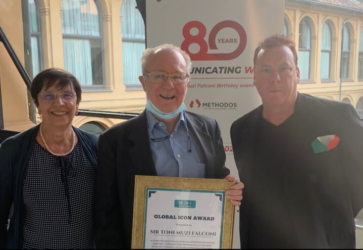 The award was presented by Justin Green, President and CEO of Global Alliance, during the 80th Birthday celebration of Toni Muzi Falconi on July 22, 2021, in Milan, Italy. A series of live and recorded brief speeches retraced Toni’s tireless years in the world of communication, focusing on the link between PR and organizations, society and academia.

We all congratulate our member Toni Muzi Falconi on this great achievement!

February 2021 is the second annual #EthicsMatter campaign of the Global Alliance for Public Relations and Communication Management.

Ethics Month is an initiative to engage and stimulate participation on the importance of ethics as foundation of PR and communication practice for truth and trust building.

Several associations and institutes are participating with seminars, articles and books. Among the resources, EUPRERA has contributed with three video interviews freely available to everyone.

Some of the upcoming resource include A. W. Page Society articles “The Whole Truth” written by Roger Bolton, President of Page and “The New PR Ethics” written by Eliot Mizrachi, Vice President, Communications and Content of Page.

The fifth annual Global Communication Report, New Activism, the report from the USC Annenberg Center for Public Relations in partnership with Global Alliance for Public Relations and Communication Management, examines the evolution of activism and its impact on PR. The Center also will launch a podcast series on May 4, titled “PR Future”, featuring interviews with prominent activists and PR industry professionals.

The report finds the new generation of activists are younger, more diverse, and more collaborative. They also prefer voting over protesting. Communicators believe that, due to decreasing trust in Government, activism will grow in influence over the next five years, and that “average citizens” will be one of the most influential types of activist. The study also found that what it calls “New Activists” are aligned with PR professionals in the belief that the best strategy for creating long-lasting change is not protesting but voting.

“We are witnessing the democratization of activism: Today’s activists are everyday citizens united in their desire to create real change and they’re employing modern communication strategies to influence the political process,” says Fred Cook, director, USC Center for Public Relations. “Their influence is growing, and they’re willing to partner with progressive companies who align with their values.”

EUPRERA interviews Øyvind Ihlen, Jim Macnamara and Ralph Tench asking them a short insight on ethics. These interviews are part of the First Ever Global Ethics Month, launched by the Global Alliance for PR and Communication Management.

The campaign #EthicsMatter will bring attention to the importance of ethics in communication in all areas of business, government, non-profit and education and showcase all that our members are doing to educate and empower public relations professionals.

Watch the 3-min insight on #PostTruth society, #legitimacy and #professionalism

Watch the 3-min insight on #PublicTrust, #professionalism and #manipulation

More info on the
First Ever Global Ethics Month

Drawing on the unique Maori and Pacific culture of New Zealand and surrounding Pacific and Asian neighbours, WPRF2020 will offer a meeting place for discussion, deliberation and interaction on our WPRF2020 theme Connecting with Courage: human connections and relationships are the heart of public relations. As our profession enters a new decade and navigates the shifts affecting our society, how do we ensure that these connections are authentic, sustainable and represent the multitude of voices? It takes courage. 1500-word abstracts on this theme can be submitted until December 31, 2019.

The WPRF2020 includes a Research and Practice Colloquium to be held on October 12: a full day of discussions and presentations from educators, researchers and practitioners, which builds a bridge between the academic and practitioner communities.

The Global Alliance board of directors invites all GA Members to make a bid for the site of World Public Relations Forum 2022 – 12th Edition: every two years, the Global Alliance for Public Relations and Communications Management, the “United Nations” of public relations, brings together senior public relations practitioners and academics for 3 days of communication, education and inspiration (1 day of Research Colloquium and 2 days of Business Program) in conjunction with a 1 day workshop for Association Leaders and 2 days of Global Alliance board meeting.

While Global Alliance has received excellent interest to host the WPRF 2022, the deadline for expressions of interest has been extended until August 31, 2019, following requests from member organisations. A formal in-person presentation will be required to be made by all interested parties in late October 2019. If you need further information as well as the Guide for Potential bidders, please send an e-mail to GA CAO – Mateus  Furlanetto: mateusfur@uol.com.br.

The Global Alliance for Public Relations and Communication Management 17th Annual General Meeting was held on April 6 in São Paulo, Brazil. Global Alliance Chair José Manuel Velasco presented the 2018 highlights and achievements, which include the partnership with international associations such as EUPRERA.

A new President, Justin Green from PRII Ireland, and board of directors who will commence their appointments 1 July 2019 were elected by the AGM. The incoming board includes leading professionals, academics and industry association leaders, with representation from every continent and it also has a perfect gender balance. 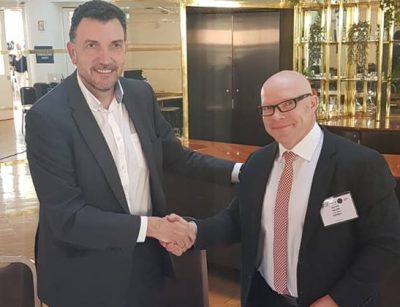 The Global Alliance for Public Relations and Communication Management, the confederation of the world’s major PR and communication management associations and institutions, already cooperated with our association. Recently, on the occasion of the World Public Relations Forum in Oslo, a formal agreement has been signed between EUPRERA and the Global Alliance.
The agreement was signed by Øyvind Ihlen, EUPRERA past president, and José Manuel Velasco, Global Alliance chair. We are looking forward to organising the first initiatives!

The World Public Relations Forum WPRF 2018 will take place in Oslo, Norway, on April 22-24. Delegates from over 30 countries will have the opportunity to choose among 40 different talks, in the global meeting place for the most pioneering minds in public relations.
WPRF 2018 will be hosted by the Norwegian Communication Association (NCA) and the Global Alliance for Public Relations and Communication Management (GA). Go to WPRF website

Less than one month to go: the global communication community is gathering in Oslo, Norway, on April 22-24 to discuss Communication’s impact in a digital and ever-changing world at the World Public Relations Forum (WPRF). These changes will be explored from three main perspectives: truth, profit and intelligence.
The programme includes research and practice colloquium with 3 keynotes and 6 paper sessions; business tracks with 32 keynotes; social events among which a networking dinner at the opera.